Klaus-Michael Kuehne was born in Hamburg in 1937, grandson of August Kuehne, one of the founders of the forwarding firm Kuehne + Nagel.

He completed a banking apprenticeship, followed by training at forwarding and shipping companies, shipping agents, and at the firm’s European and overseas branches.

In 1963, he became a general partner in the company and two years later was appointed Chairman of the Management Board of the newly founded Kuehne + Nagel Speditions-AG.

After his father’s retirement, he became CEO of the Group and delegate to the Board of Directors of the holding company, Kuehne + Nagel International AG.

As Executive Chairman, he continues to take a strong interest in the development of the Kuehne + Nagel Group. 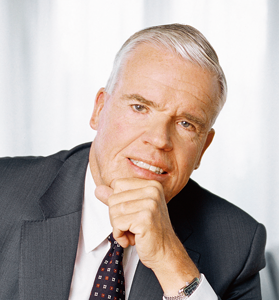